January 20, 2017
UncategorizedComments Off on Last day at Rachol Seminary

We expect up to 14 volunteers today to help to iron the painting and prepare to put it back on the temporary metal stretcher, which has already inflicted do bites on numerous victims!. Piero, Elizabeth, Caecilie and I meet up for breakfast in the Father’s refectory looking bleary eyed. I don’t think anyone is really aware of what they are eating, as our mind is on the numerous surface imperfections we need to ease out before the painting is put back onto the stretcher.

Piero goes off for his morning cigarette, while Elizabeth is already in the big drawing room where ‘King Sebastian’ is lying awaiting for further treatments. She asks a question and my brain is so full of what, if, but, maybe, that I have not heard what she is asking. This is only the beginning of our final phase of the relining, but I can already tell that I need to come back from Panjim for another day which I can barely afford, as time is running out fast.

Jo arrives early with Manu ready for the final ironing, and then Joanna arrive punctual as always having had to coordinate to pick up Milena and Eveny who live 1 hour north of Panjim,  having also brought cakes for 100 students and staff from a Panjim bakery, together with Sheila, Francis and Carlos who are sharing a house she has rented near Old Goa. Rhea and Sandesh arrive separately having had to finish other work.

With three irons is use and numerous hands to remove the paper stuck on the border used to protect the front of the painting when applying the paste all eyes are on the final stage. Back breaking, with the essential help of the boys who have more strength than us the irons glide on the surface at 40° C. Piero has a temperature gauge on his CAT phone which checks the temperature of the irons as we try to be as exact as possible. 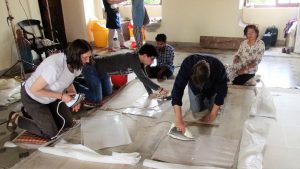 The black shellac rosewood frame is being cleaned by many hands with the help of a very rickety ladder which is moved in a very odd way with a pot of cleaning gel left on top. The scene is very comical, but we do cannot afford to avert our eyes from the painting. 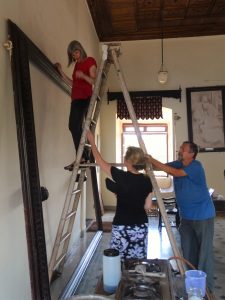 Lunch is as always delicious, but there is much less chattering and time spent than usual. We want to get back upstairs. With a small section of ironing left to do, we continue our task. We have two small paintings which will be taken to the Archbishop’s Palace to finish. The first one is ‘the temptation of Saint Ignatius of Loyola’ which has been over restored in the past, has had a surface clean and consolidation, the second ‘The Holy Family’ has had a surface clean and  they both need a coat of varnish. Not to mention the two statues brought by Father Mansueto who has carefully removed the surface dirt this week at Rachol.

It is time to put the painting up and allow it to breathe, as well as us. We decide to stop, Piero cannot help himself – he removes a small square of japan paper to see the painting surface. All is well and he is happy. Elizabeth and I finally breathe a sigh of relief. The tension over the course of this week has been excruciating. 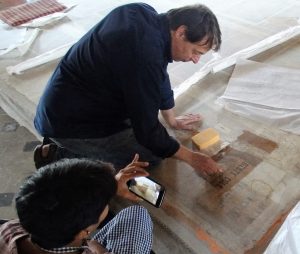 We leave knowing that the surface needs more attention next week before putting it back onto the original stretcher.

Back in Panjim we are honoured to be invited to have dinner at the Palace with His Grace Filipe Neri to celebrate his birthday. What a truly magnificent way to finish an ecstatic and agonizing week.

« Fish markets and dogs’ teeth
Somewhere between London, Italy and Goa – with thanks to Caecilie Vieth Vad, our Danish guest editor »