January 29, 2016
UncategorizedComments Off on Colvale

All the chores seem to take us such a long time. Just to give you an example C. went yesterday to find a bedside light for Ruthie and Jenny coming this weekend, and was told none were available. Caetano went to the same shop and came back with one which he is using to control how much he is removing from the back of the canvas he is delaminating. We came to the conclusion that we are describing items differently. 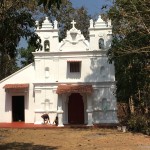 Anyway after having pick up Joanna we headed off to Colvale which is in the North of Goa. We had great fun seeing lovely very colourful indo/portuguese houses and so many churches and chapels. We stopped and went into one chapel to discover that it is at least 300 years old, with a  typical ornate tabernacle which was not gilded, possibly because it is in a remote country location. 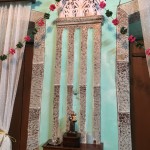 It had a simple pastel blue and green decoration on the columns. Juanita who is in charge of looking after the chapel has the main statue at home for fear it may be stolen. She explained that it is made out of wood and very old. Sunday is the feast of the Refuge of Sinners (Refugium Peccatorum) and that chapel is named after it. The big statue will be displayed and the entire village will attend a big celebration. We shall go. 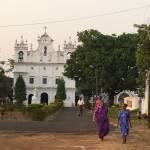 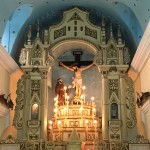 Driving up river we came across a bigger church dedicated to St Francis facing the football pitch with the river at the back. We went in and in certain aspects it was so Indian  (the somewhat gothic style altar) and in other aspects it had the Italian touch, such as the ceiling which was painted blue with gilded stars similar to the church in Assisi.

We arrived at our weekend escape (from the howling dogs and musicin Panjim) to the sound of a scratched vinyl record blasting out. I thought ‘here we are at another festival’, but to our surprise we discovered we had a temple opposite on the other river bank which plays music for hours …. then all of a sudden it stopped.