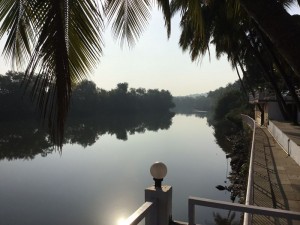 We woke to another beautiful, hot and still morning on the river at Colvale, and after breakfast in the company of a kingfisher, some monkeys and the silence, we headed into the village for Mass at 10am. 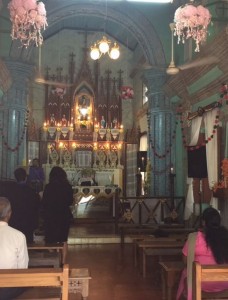 The little Chapel had been especially decorated for a feast day and a small statue of the Madonna had been taken from the safety of a village house, garlanded and displayed centrally in the Chapel for the occasion. The entire Service was held in Konkani, but was remarkably familiar nevertheless as it followed familiar patterns and cadences. The visiting priest, Father Simon Rico, is quite an orator and we were swept along by his sermon even though it was spattered with very few words of English. 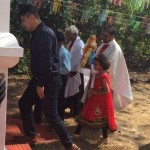 Being part of this jolly and colourful community for a brief interlude was very special, and as the congregation paraded the Madonna out of the Chapel to the accompaniment of firecrackers in the sunshine, we witnessed again that uniquely Indian expression of the Christian faith.

We headed South East in search of another hidden Goan gem, this time a small and unique hotel, originally built by Loulou Van Damme, a Belgian resident of India, perched inland on a hillside near Corjuem between two tributaries of the Mandovi river. Aided by trusty Google maps we found the unsigned track leading to a lush and beautifully kept oasis of 24 acres called Avanilaya, where we were welcomed by the 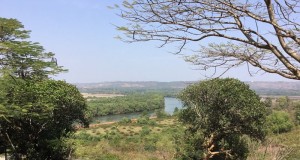 manager Charmaine Desouza (who, auspiciously had read in the newspaper about our restoration project at the Archbishop’s House) and led us into the cloistered garden of Panchavatti, the main house. Five exquisite bedrooms are arranged around a courtyard, but it was the verandah at the rear overlooking the most stunning views of the countryside and rivers below which takes one’s breath away. There are two further houses where guests can stay but everyone here can enjoy the utter peace and beauty of what must be the most charming place to stay in Goa.

Driving back to Panaji dodging cows and dogs and wandering motorbikes along the route, we arrived to see the preparations advancing for carnival next weekend, which will no doubt be an experience in sharp contrast to the serenity of this weekend.

With thanks to Joanna Brogan-Higgins who kindly volunteered to guest edit today’s blog.