Delhi Belly with a vengeance

January 12, 2018
UncategorizedComments Off on Delhi Belly with a vengeance

I managed to survive two years without encountering parasites or food problems in general having kept to a vegetarian strict diet, alas this time i was more adventurous and succumbed to some kind of food poisoning within a week. Mea Culpa entirely. Too bad for me and it took two days to feel better not to mention the fact that I could not work yesterday afternoon and abandoned everybody. The work has progressed magnificently without me and at a good pace.

One painting which had a very brittle canvas which was not secure to the stretcher at all has been successfully strip-lined and is back on its stretcher. One painting  has been fully cleaned and the mould removed – we had just gone through with the students discussing a paper describing this problem as whitish haze – very appropriate and good timing! One painting stretched and the keys (wedges) replaced. The painting is being retouched using reversible colours. The last painting has had a terrible repaint which we thinned but not removed as it is very thick and looking through a  digital microscope very little original paint can be detected. The four matching frames have had the inner slip oil gilded beautifully without any supervision. I am so proud of the work being produced by the Goan team, who are demonstrating so well that they have taken on board all the lessons learned over the last two years. 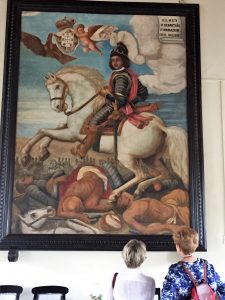 This afternoon Sheila, Marie Christine, Christopher and I went to Rachol to look at the work done last year on King Sebastian and what the students had achieved after we left. What a transformation! It was an extraordinary feeling to see the painting back on the wall and to think back to all that was achieved last year. We still need to complete the treatments in the near future, and so were discussing getting scaffolding put up in order to move on to the next stage. Father Aleixo wants us to reline three other paintings  in the the same room which are in severe need of love and attention, as in the case of two of them the colour has faded almost completely . We shall tackle what we deem possible in a short space of time as the problems these paintings present are incredibly challenging.

Leaving Rachol we stopped by some paddy fields to look at kingfishers, egrets, a brahmini kite, anahingas, purple gallinules and a lovely looking small bird with a white tummy and yellow back – time to consult one of our bird watching friends. As we sat in the car we were approached by a charming man who lived there also called Christopher, whose wife is a keen bird watcher, and we have been invited back for tea! Apparently there is a crocodile who appears this time of year. Good to know for when we go for walks in those fields.

After a full day we were back so late we declined going to see a dance in the House of Goa Museum, too much driving and too much erratic traffic. We did manage to go to an open air projection of a lovely film ‘A Street Cat Named Bob’ last night followed by a delicious meal at Tamarind.

« What a difference from last year
New arrival »