Give before we can ask

February 2, 2016
UncategorizedComments Off on Give before we can ask

With January behind us, February welcomed us today with a sticky 36 degrees. Even as we arrived at the Archbishop’s Palace in the morning it was noticeably warmer than the last few days, and Goa is apparently one of the warmest places to be at the moment. We are not complaining. 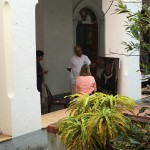 After a talk from Caterina about the benefits of rabbit skin glue in virtually every application of restoration, versus new and complicated, synthetic compounds, the majority of the students worked in the cloistered courtyard of the Archbishop’s house with the portraits in varying states of restoration, on tables carried outside, in order to benefit from the very even and soft daylight which allows the naked eye to see the paintings clearly.

The seven pictures which we are have been working on have had their surfaces cleaned, the old varnish removed, holes patched, tears consolidated, paint loss filled and retouched, and in some cases the fragile canvases strip lined, and we are now preparing the new varnish which will mark the start of the last phase of restoration for some of these portraits which is exciting. 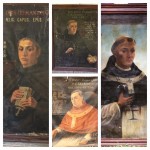 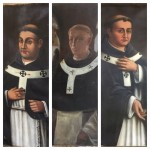 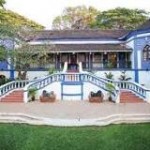 Later yesterday evening we returned to Altinho Hill to Sunaparanta, the contemporary Arts centre in Goa, very close to the Palace, which has at its heart Cafe Bodega; this is a necessary place of sustenance to those of us who sometimes simply cannot survive without a proper tea and has the equivalent of a Great British Bake Off Winner as its cake supplier… The gallery was hosting an evening during its annual Sensorium Festival, which included a conversation with Nikhil Chopra. Nikhil is a performance artist and when asked some very interesting questions by his Westminster educated host, was extremely articulate in arguing the relevance of his art and particularly within Goa.

When asked about funding Nikhil replied “I believe we have to give before we can ask”, and I felt that this struck a chord with what The London School of Restoration is doing here in Panaji. We have to demonstrate what can be done to preserve heritage before we can ask people to appreciate the value of that heritage.