Half week and a super moon

February 1, 2018
UncategorizedComments Off on Half week and a super moon

We have all spent 48 hours in Rachol, back in dorms, back at boarding school, fabulous food and very high targets achieved. The portraits of the first Partriachs of Goa only completed in the 20th century have deteriorated to such an extent that you feel some dramatic external causes have interfered and reduced these portraits literally to a shadow of what they were.

Just removing them from the walls revealed a thick board nailed to the back, the removal of the stretcher covered in mould allowed us to examine the reverse of the painting.  By doing this we could assess the condition under the stretcher and the fragility of the linen or cotton canvas depending on the painting.

We were very tired by the end of day two but all satisfied with the progress of understanding what we had to consolidate, re-attach, remove and actually (the best lesson of all) leave alone and  intervene as little as possible. 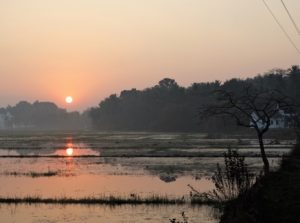 We had a fantastic early morning bird watching and being invited by a local Goan couple Christopher and Melanie who have created the most beautiful house next door to Rachol overlooking the paddy fields with a magical sunrise behind a small old church. My favourite hoopoes with their punk hair dos, coppersmith barbet, asian koels, white breasted water hen, white wagtails, amongst some of the birds wee spotted but no sign of the crocodile who is lurking somewhere among the whistling ducks.

Back to Panjim having survived the traitorous driving which leaves us each day with a few extra white hair and shaky, we re-enter the familiar Archbishop’s Palace and are all happy to go back to St Francis Xavier studio. The last four problematic Portraits of the third series are being painstakingly worked on ,rediscovering a beautiful coat of arms in one, a delicate painted prayer book in another one, a skilfully painted moire silk vestment on a third and a resurrected canvas which had been stuck to a ply backing on the last painting.

Last night was the famous super moon eclipse and Christopher wanted to find the perfect spot. We found the ideal location but unfortunately between the rats scouring along the shores of the river and the black smoke bar induced by car engine exhausts  we decided to stand briefly just to admire the beginning of the eclipse and promptly left to go back to a delicious meal cooked by our cook Nikita followed by a seriously master-chef creation of Christopher’s ‘pineapple flambe’ pudding. What a way to end the day.