It’s been a crazy week

January 28, 2018
UncategorizedComments Off on It’s been a crazy week

My feet have hardly touched the ground over the last week, and I have been too exhausted in the evenings to write the blog. Running the project in two different locations with students hard at work in both places and dealing with all the various challenges has proved to be a struggle this week, but still enormously rewarding.

At Rachol we are retouching the big portrait of King Sebastian, with two or three students working on the rickety scaffolding which has been erected in front of the painting. It’s a painstaking undertaking to make the finished work look as much as it would have been originally, matching the colours where needed on the background and the lumpy ground of the seams, unfortunately seams are a problem and thinning them is not an option (it may look much better aesthetically but it would weaken the already very heavy painting) . It’s looking so different from the deformed and very fragile painting we started a year ago. We are looking forward to getting the final varnish on.

We have also started work on two of the portraits which were hanging on the wall in the same room. Our aim here is conservation and consolidation, as these portraits have suffered extreme fluctuation of humidity which we discovered was much worst for a backing nailed on the frame which trapped the moisture and allowed all sort of micro-infestation, not to mention termites 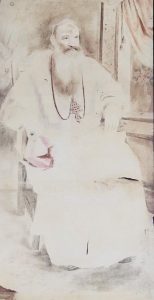 on top of it all. As the backing came off what felt like half a kilo of detritus was collected. The intense light together with the poor quality of pigment have resulted in 50% to 90% of colour loss. How do we come back from this, well you do not. It would appear that the original paint used in the 20th century, as we had some colours analysed,  was primarily bulking material and very little of the pigment itself –  resulting in the colour  fading leaving just the white disintegrating preparation. On top of this the canvas is very weak and pitted with small holes. The team were amazing at removing the surface dust, hence getting to know the art work, examining what type of consolidation is needed,helping to prepare the backing canvas, prepare the relining mixture, covering the painting with appropriate non woven fabric to protect the paint surface and then finally joining the canvases. It’s great to see the lessons learned from the last years have been well absorbed and are being used by the students to good effect with pertinent question as I decided to slightly change the procedure of relining for a small technical issue, which was picked up immediately by several students.

Whilst all this is going on at Rachol the work continues at the Archbishop’s Palace, where the students continue to work on the portraits as well as two polychrome statues. The challenges that we face with the portraits is that in some cases these have been so badly repainted by previous restorers that removing the overpaint would like very little original paint (where the paint has disintegrated) or cannot be separated from the original without damaging it. Here again the main goal is to conserve  – we are using basic infra-red photographic analysis which has helped with the crest of an Archbishop which had been covered over completely. We are also cleaning the frames and gilding the slips using gold leaf, and it’s a joy to see how proficient the students have become at gilding.

play at the Kala Academy in Panjim. Two Fathers was written by Sundar Sarukkai and directed by Srinivas Bhashyam, and is about Einstein and Gandhi – two amazing men who knew about each other and corresponded but never met. The play deals with the challenges of parenthood and the the troubled relationships that fathers have with their children – it was an extraordinary performance and very enjoyable.

On getting back to our house in Fontainhas the festival in the surrounding streets was in full flow – this is a Jatra in celebration of Hanuman the Monkey God. The streets are lined with stalls selling everything you can think of, the bands are playing with trumpets and drums, the image of the God is processed on shoulders, and everyone is out admiring the temple which is lit up in full glory!

Saturday afternoon we left for a fantastic hill top enclave with view out onto plains and sea beyond. I rested and tried to get over the second tummy upset in three weeks, c’est la vie.

« End of the week
Half week and a super moon »