January 15, 2018
UncategorizedComments Off on New arrival

Marie Christine left this weekend feeling better I hope, she caught a nasty cold soon after arriving and went through at least several boxes of tissues.  So far nobody else seems to have suffered luckily, because it’s not much fun feeling unwell away from home.

The weekend was great, weather hot and pleasant by the sea with a constant breeze and listening to the waves breaking on the shore was the type of sound of which one never gets tired. No particular birds but quite an excitement to see dolphins on the horizon – apparently there are two types of dolphins on this stretch of coast but I have not studied which ones they are. We returned to our house which we enjoy enormously as it is in Fontainhas, the old Portuguese part of town, twenty minutes’ walk from the Palace and not toooo many howling dogs at night. Sheila was there and I offered to prepare a simple plate of pasta when suddenly the fans went off, the drinking water pump stopped working, the air conditioning stopped as well and the lights upstairs died.

We were left in a tropical type of humidity in a very uncomfortable temperature. Unable to find some of the fuse boxes, we spent the best part of an hour with random keys found scattered around the house trying to open doors, cupboards, the outside electricity box etc. all to no avail, Finally Christopher found the owner’s brother who promised to come and help once he returned home after a party at around 11 pm. Having given up hope and ready to go to bed but cheerful the lovely Yshana who looks after the property arrived with a technician from the electricity board. I do not think something like this would happen in the UK on a Sunday night. He fixed the loose connection and all went back to normality.

In the meantime we had Piero sending us videos of his work in Damascus with a solvent container with an Arabic description. He asked us to guess what solvents they had used, whilst he listened to the sound of firing near him. You could clearly hear firearms and bombing in his neighborhood. How distressing. 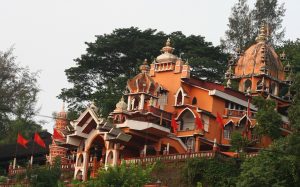 It’s Monday morning and Leona arrived happy but tired after a long trip with our new driver Sandy who picks everybody up from the airport and is reliable, so please note his name and expect to be collected by him if you are arriving. She disappeared off to bed whilst Sheila and I walked up to the Palace through the grounds of the Maruti temple dedicated to Hanuman, which sits on the eastern slope of the Altino hill. The studio in the Palace is empty when we arrive and I have time to gather my thoughts before the students trickle in. The day was good with more cleaning and patching, the removal of a plywood sheet glued to the back of canvas of a painting, finishing the gilding of four frames and almost completing the conservation on the ‘Saint Ignatius of Loyola’ polychrome statue entrusted to us by Father Loiola,

We ended the day with a visit to the studio / shop of our favourite Goan designer, the extraordinary and talented Wendell Rodricks