AWARDS – 20 YEARS OF SUCCESS AND RECOGNITION FOR OUR STUDENTS 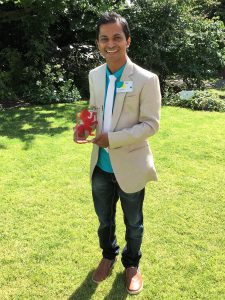 We are delighted to announce that in a fantastic and prestigious awards ceremony in London on the 15th June 2017 Sandesh Naik was awarded the Outstanding Achiever of the Year Award, the top Lion Award from City & Guilds. Given that there are more than 2 million students each year studying some kind of C&G qualification, this award is truly special and the presentation to Sandesh was the grand finale to the Medals for Excellence programme..

Sandesh is the first Indian national to win a Lion Award, and is the first student from Asia to win a Medal for Excellence in Picture & Frame Conservation.

Caterina Goodhart, Principal of The London School of Picture & Frame Conservation, said ‘We are all so proud of what Sandesh has achieved, and this award reflects his tremendous commitment and tenacity. It’s also a wonderful reflection on all the other students and volunteers who have worked so hard on the Restorers without Frontiers project.’

See the video of the awards ceremony here – https://youtu.be/wH-5kx8SG1c

More on this story on our blog – http://www.pictureconservation.com/city-guilds-outstanding-achiever-of-the-year-2017/

In February 2017 City and Guilds announced that Sandesh Naik has been awarded a City & Guilds Medal for Excellence in recognition of his outstanding performance in Level 2 Certificate in Design and Craft – Conservation and Restoration (Picture and Frame Restoration).
Sandesh is one of the students from Goa on our Restorers without Frontiers project. See here for a short video of Sandesh together with some of his work.

in Creative Techniques in 2D and 3D. Anthony then went on to win a coveted Lion Award (there are only 9 each year for the over 2 million C&G learners), and was awarded Learner of the Year. Click here to see the video made by City and Guilds to celebrate.

In 2012 Ruth Bothwell was awarded a City & Guilds Medal for Excellence.

In 2009 Evangelos Lymperakis was awarded a City & Guilds Medal for Excellence. Evangelos was also given a Special Award and prize from the Worshipful Company of Painter-Stainers.

Lecturer and painting conservator Caterina Goodhart has been chosen as this year’s recipient of the highly regarded President’s Award 2008.

His Royal Highness The Duke of Edinburgh is President of the City & Guilds of London Institute, the UK’s leading awarding body for vocational qualifications. The President’s Award is personally presented to Mrs Goodhart who has had an exceptional working relationship with City & Guilds over many years, achieving outstanding success in her teaching career. Established in 1997, The London School of Picture and Frame Conservation is currently the only independent school in the UK to offer a nationally recognised qualification in painting conservation. An expert in her industry, many students from all over the world come to her college seeking to benefit from Goodhart’s expertise. She shares her love for her craft through her inspirational teachings and infectious practical approach, where her extraordinary knowledge and experience is recognised and appreciated by her students – some of whom have gone on to be both tutors and recognised conservators in their own right. Amongst these is Martin Few, who is currently working for the Government Art Collection, conserving paintings at the British Embassy in Prague.

In recognition of her commitment and her many great achievements, the 2008 President’s Award is presented to Caterina Goodhart.”

In case you wondered how big a deal it is to win a City & Guilds’ Lion Award, the eight Lion Awards are drawn from over three quarters of a million people who take either City & Guilds or ILM qualifications

‘Among the winners was 26-year-old Hazel Foreman, who was awarded the creative Craftsperson of the Year prize for her work in painting restoration and conservation. No stranger to attention, Foreman has previously appeared on the BBC’s ‘People behind the Palaces’. This popular program gave viewers an insight in to the life of a conservator, detailing the role and the challenges a modern day conservator could well expect to face.

Coupled with her specialised City & Guilds qualification, this helped Foreman achieve the position of Head of Care and Preservation for the English Heritage and the Southern Museums. The achievement is that much more notable when you take into account her youth, being aged 25.’

Also in 2000 Ruth Foggin was awarded a Medal for Excellence for outstanding performance in Creative Studies Picture & Frame Conservation Part 1.

In 1997 Dot Hoolahan was awarded the City and Guilds Bronze Medal for Excellence, and was personally given the medal by HRH The Duke of Edinburgh at a special awards ceremony at Buckingham Palace.

Each year, City & Guilds selects around 100 people from over three quarters of a million eligible candidates to win Medals for Excellence. The Medals for Excellence programme rewards talented people who have displayed exceptional standards as a lecturer, learner or external verifier. Only eight of these winners are presented with Lion Awards at the Oscars-style ceremony in London – to celebrate the very best of who have gone the extra mile to complete their qualification.

To quote from City & Guilds – ‘Everyone who succeeds in a City & Guilds assessment (and there are about ¾ million of them every year) has something to be proud of – they’ve all worked hard for their certificates and diplomas.

Medals for Excellence is designed to identify and honour a small number of these people whose work and ability makes them really stand out. We are looking for really exceptional candidates because we want to celebrate their achievement. We also want to recognise the dedication and creativity of those who have helped them on their way as lecturers or trainers.’

Each year an external assessor appointed by the City and Guilds Institute visits the school to look at the work of the students and ensure that the quality of teaching is up to standard. This year’s visit took place in July, when the assessor met with a number of students and looked at samples of the work produced by others. The following are excerpts from report by the assessor

‘This is, with no doubt, a centre of excellence in its field. It is almost unique in Britain.’

‘The tutor assessors are all practising restorers and artists of national if not international repute.’

‘The centre is tiny yet teaches and has taught members of the Art Fraud Squad and the Government Art Collection team.’

‘They are now achieving awards against the V&A, the Hamilton Kerr Institute and Courtauld students,’

Ex students from the school are to be found working in all parts of the globe – we have had students from Australia, Brazil, Canada, Chile, Finland, Germany, Greece, Ireland, New Zealand, Peru, Spain and the United States. Richmond is a beautiful place to study, and only 30 minutes from the centre of London by train or underground.

The School has 2 scholarships which it awards to students each year, based on merit and need.

The Egidio Cioppa Bursary is awarded to a student each year who is unable to afford the full fees, and is a Bursary of 50% of the fees for each term.

The Kurt Hahn Award is a Scholarship based on merit awarded to a student who has shown promise during the initial course, and is moving on to study at a higher level. The award is for 1 year only, and is for up to 50% of the fees for each term.

In addition to these students have also been able to apply for the City and Guilds Access Bursary, which is a grant made by City and Guilds to cover Course fees. NADFAS, the National Association of Decorative & Fine Art Societies is a leading arts charity which may also be able to provide support to  prospective students.