January 31, 2017
UncategorizedComments Off on Obstacle course 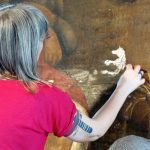 We seemed to be hitting quite a few hurdles today. Joanna and Anna are not in top form thanks to a tummy bug, but as true Brits they come and start work before the others. It’s the last day for Sheila  – she has been incredibly efficient, precise and reliable with the difficult treatments, but most of all smiling and calm at all times especially when asked to remove six layers of varnish from one particular area on ‘King Sebastian’! She proceeded with great care and with a controlled series of gel solvents worked her way through in the most incredible heat and humidity. She stood on a bench for a good 6 hours and took the exhausting difficult clean in her stride. It must be the Canadian roots and her British adoption that bring out one of the nicest temperaments and attitude to work that I have come across in many years.

Now to the hurdles that kept coming at incredible speed and ever higher. The new stretchers have given us a few problems, therefore after taking off the relined canvases for the third time Caetano devised a system to keep them straight, restretch the linen, place them in the frames and then 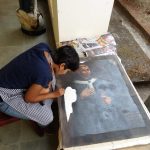 only after this put the wedges in. It works – all the canvases are a slightly different size and the frames follow. They have been numbered but for some reason the numbers disappear because either the frame has been planed in that corner, or the sticker has come off. We have spent a good hour pairing frame to stretcher and painting. We now have the right sequence and the correct combination. All this not to mention that the frames are from rosewood wood and incredibly hard to hammer a nail in, so a small drill has been used to avoid damage to the wood. No wonder the termites who have attacked everything in sight have avoided the frames.

Patches had to be removed on two paintings, they were pulling and showing a little bulging from the front. We replaced them using a very precise insert and a light binder on one and a thread by thread joint on the other. It looks as good from the front as it does from the back. 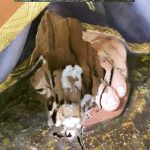 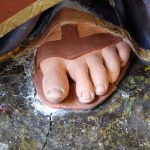 The two statues from the Archbishop’s private Chapel have had reconstruction of the foot of St. Joseph. The old foot had been severely damaged by termites, and it’s amazing to see what Sandesh has achieved with the reconstruction. We have also been working on further removal of overpaint on The Virgin Mary, but there is still ‘a wee way to go’ as they say in Scotland.

The afternoon ended with a beautiful Mass in the Archbishop’s private chapel to coincide with the funeral in England of Christopher’s sister. We were so touched that many of our students attended, including Sandesh who is Hindu, and Sheila and Frances from the European contingent. Father Armando, part of the Bishop’s household, administered the service with great calm and dignity. After Mass we met with the Archbishop Emeritus, still full of energy and enthusiasm at the ripe age of ninety!

« Half way through – but a long way to go
Beautiful countryside »