Somewhere between London, Italy and Goa – with thanks to Caecilie Vieth Vad, our Danish guest editor

January 21, 2017
UncategorizedComments Off on Somewhere between London, Italy and Goa – with thanks to Caecilie Vieth Vad, our Danish guest editor

When I wrote to Caterina in November last year, enquiring about what she was up to, little did I know that it would lead to a tropical adventure in the South Indies on the ‘Restorers without Frontiers’ conservation project. Her reply came promptly with “Can you come to Goa?” What could I do other than say yes!

The London School of Picture and Frame Conservation was for ten months the one day a week where I would go for this wonderful escape into another world, discovering the secrets of paintings and treasures of materials. The classes with Elizabeth and Caterina introduced me to the field of conservation, which now I am studying at university in Copenhagen. I knew the time spent with them in Goa would be very educational – and demanding.

After a 20 hours journey, I arrived in Dabolim Airport 6.30 in the morning, local time. I was picked up by a driver and taken to the nearby Coconut Creek Resort to meet Elizabeth and Sebastian. On the way my mind already filled up with impressions of India; sacred cows, goats and pigs on the road, scooters, palm trees, vibrating colours and endless masses of litter.  After a nourishing breakfast and a refreshing walk to the palm beach accompanied by Elizabeth, Christopher came to pick us up to go the Rachol Seminary – from that point on it was hard labour the rest of the week, as has been described in the blog over the past days.

Helping on the project of restoring the impressive portrait of King Sebastian at Rachol has been a true experience; enlightening and might I say at times chaotic. I would try to recall the lessons in London, while keeping focus on the work to be done. Doing notes for future reference and keeping all the information straight. Piero and Caterina would be communicating in Italian, which would continue in the dining room with the fathers, who of course all spoke the language beautifully. This was mixed with enthusiastic conversation between the local students shifting between Konkani and English. The sheer volume of information during the first days let me lie in bed with my head buzzing with all the noise and impressions accumulated through the day,

The relining of King Sebastian has been backbreaking, tedious work – but whenever I took a moment to lift my head up from my working position on the floor, and look to the view of the surrounding palm trees and the blue sky, I was reminded of the blessing it is to work in such a beautiful location as Rachol. 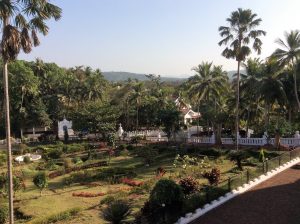 Everybody at the Seminary has been truly welcoming and generous in taking care of us, and making us feel at home. Everywhere I went in the Seminary I was met with a smile. Coming from a Scandinavian Protestant background, I have learned a great deal of the Catholic faith and its current state in today’s Goa. The kitchen at Rachol introduced me to delicious local food, which was generously served  three times a day, and I have learned that I quite like having dahl for breakfast, and cumin tea with my dinner.

I have had the pleasure of working side by side with Caterina, Piero and Elizabeth for a full week. Their commitment and love for the conservation field is unmistakable, and they leave you working harder and wanting to give it your best. The Goan students are a wonderful group, and the whole room fills up with energy on their arrival. I am blown away by their commitment to the course and admire there honest and open approach to this project. I have a great deal to learn from them.

Christopher and Caterina are admiringly working nonstop, and I want to say a deep felt thank you for letting me tag along on this educational adventure. I had not been able to imagine all the wonderful experiences I have gathered already – let alone thought that I would be invited to dine at the Archbishop’s House with His Grace, Archbishop Filipe Neri Ferrão, Patriarch of the East Indies, on his birthday this past Friday evening.

Needless to say, I look very much forward to see what the next week will bring.