Exploring the South of Goa’s coast and then meandering back up through the very dry and still extremely green inner land was simply breath taking. On the way back Saturday mid- morning, having missed the turning for a Christian Monastery (we shall get there at some stage) we ended literally climbing a mountain as Joanna and I 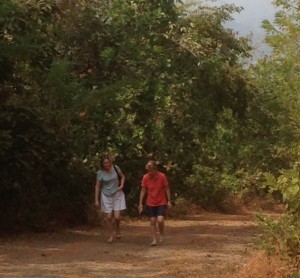 were asked by our brilliant driver to get out as the car stalled and would not move on this dirt track. As C. sped off leaving the two of us covered in this reddish dust, we were panting out loud and hoping that our driver would wait for us eventually. Anyway we reached the top and in the cacophony of sounds by all sorts of cars and scooters trying to turn and park in a space of 30 feet by 30 feet we became part of a visit to a shrine on its most important day of the year. We climbed up the steps to see the imposing view but did not queue to go in.

We missed another turning to one of the oldest churches, the maps are not detailed and the road signs do not indicate turnings …. we shall persevere and try again, but by then it was 4pm and our driver was understandably exhausted.

We booked our second weekend night at a Pousada which has one typical Portuguese two storey red brick colour house and another Hindu white house with an inner courtyard which has a fountain. No cockroaches tonight please. It is getting warmer, even at night we are approaching 30° C – wonderful!

Dinner was at the charming Fisherman’s Wharf and guess what… Anna and her husband George sat down 2 tables away. She had discovered the spice plantation but as she is leaving on Thursday she is worried to get the canvases ready for strip lining (quite rightly), so back at the House for her on Sunday. 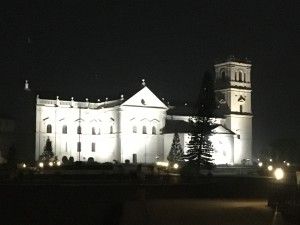 After supper I wanted to see Old Goa by night with the full moon above, so we drove out there – it’s staggeringly beautiful, and at the same time so strange to think that it was deserted by the Portuguese because of disease (mostly malaria and cholera). Then back to Panjim to sleep.

« No teaching on Friday!
Meeting of Restoration minds in Goa »