The end of the road (for this year)

February 24, 2018
UncategorizedComments Off on The end of the road (for this year)

We have had a fantastic and fulfilling visit to Goa culminating in the most lovely celebration hosted by His Grace Filipe Neri, for the end of the first half of the level four programme. This gave me the chance to thank His Grace for hosting us yet again, Father Loiola for being our guardian angel, Father Valerian and of course Father Rector Aleixo from Rachol. I am grateful to them all for allowing us to conserve and help create a team of conservators who are remarkable not only for their dedication but foremost for their achievement. Well done to the Goa Conservation Team who have worked this year on 17 projects split between the Archbishop’s House and Rachol.

I believe we have been busier than the previous years with many new challenges. The major part of our visit was spent on the collection of the Archbishops’ portraits. We never know what state the paintings are in until they come off the wall and we can examine them properly. On the whole they had not received the appalling treatments the previous section had undergone but they had not escaped the repainting and brushing over which all the others had been subject to. One was stuck on plywood with the dreaded synthetic (and irreversible) glue and another portrait had been nailed onto the backing from the front! These issues were relatively minor compared to what we encountered last year. At the same time we continued with the teaching of theory and we managed to expand on topics already discussed but now refined and to go through new methods of conservation practised by conservation departments throughout the world. We were also able to look in more detail at chemistry, demonstrate the use of electronic microscopy and infrared reflectography.

In Rachol we finished the portrait of King Sebastian and embarked on the conservation of the four first Patriarchs which are on the other wall of the beautiful formal room at the seminary. They presented some serious problems with the fading of colours and very high levels of humidity as the two most severe issues. The humidity problem was immediately improved by the removal of a board nailed on the back of each portrait. With our student Rhea who is also an architect the right paint can be applied on the wall to limit this problem even further. Unfortunately for the fading of the pigments, which we have had scientifically analysed it is impossible to reverse this because of what appears to be use of low quality materials, but we can reduce the damage from now on.

The revelation this year was the rediscovery of the truly magnificent painting depicting St Francis Xavier levitating during Mass in front of a very distinguished congregation. The canvas was so badly deformed that I thought it would take several attempts to shrink before relining it. The team was superb, they all worked in harmony with new variations to flatten the canvas which is large and rotten. It was not pleasant to reline in the heat and high humidity, but they carried out the task with great fortitude and skill. I was not there for the actual facing and flattening, and arrived to turn the painting, cleaning the back, stretching it and finally relining. The team went the following day to remove the facing, it was a success. The work was greatly admired by all as we took a photograph to show to his Grace what it looked like both before and after the treatment. There is still much work to be done but we can feel confident that we have saved this important work from further deterioration.

On our last full day in Panjim we took time out from the Archbishop’s House to go to visit the Pastoral Institute in Old Goa, where Father Salema is making good progress with his plans for a small museum (with the encouragement and backing of the Archbishop). This is a great project for the Goa Conservation Team, which requires them to operate against the clock and in harmony to put all their various skills to good use to put all the parts of the jigsaw together. From design of the museum layout, selection of the objects, photography and inventory to fumigation and conservation, the team will be putting to good use all that they have learned over the last three years.

I am extremely pleased with the progress by all students who have studied hard this year. The material of the course is complex, and the subjects varied, so that at this level we will take two years to complete, and we will be back in 2019. 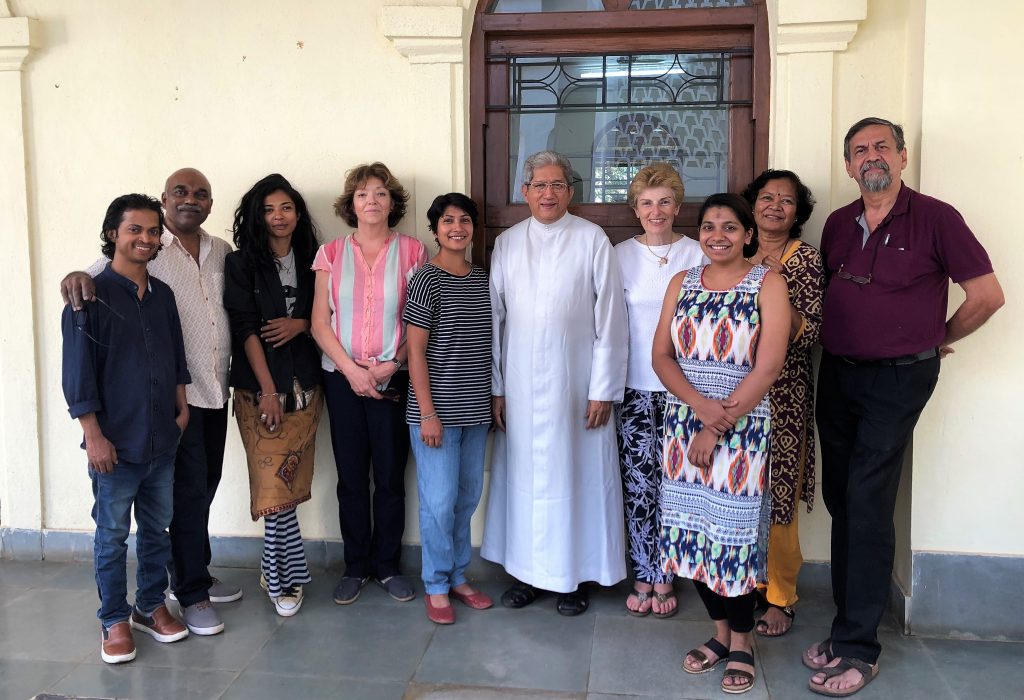