February 16, 2016
UncategorizedComments Off on “They also serve who only stand and wait” – with thanks to our guest editor Sebastian Roberts

One of the many delights of being married to a picture (“and frame” she would remind me) restorer (“and conserver, first and foremost “) is that her work, so absorbing and painstaking, gives me lots of time for reflection – and contributing to this blog. 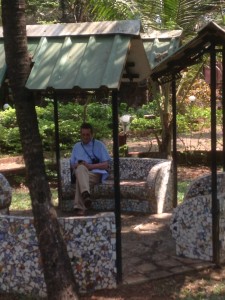 So this edition is respectfully dedicated to the spouses, partners,families and friends of “the restorers without frontiers”. Milton’s words make a suitable motto for all of us who have the honour of following and sharing the agony and the ecstasy of picture (AND frame!) restoration and conservation. This morning for instance, I was innocently enjoying the flora and fauna of the Archbishop of Goa’s beautiful garden, reflecting as I spied a pair of Indian Golden Orioles, that St Francis probably loved the birds as much as they loved him, when I heard the call of my own beloved. I responded with all the speed possible in a man with a pair of binoculars who spots a Brown-headed Barbet, a Black Drongo and a pair of Red-whiskered Bulbuls en route, and a mere 7 minutes later asked how I could help.

“The students have been working very hard” she said in the sort of low but penetrating voice that librarians use to rebuke people who talk in the carrells. Her words were full of import; I picked up at least two unstated messages: first, the teachers hadn’t been slacking much either, and second, I HAD. “They need sustenance. Something sweet for energy. Carrot cake would be popular.”

Realising that this was not the moment to ask just how many calories one exhausted stroking a couple of nanograms of gold leaf onto a 17th century Saint with a squirrel hair brush (the mere wind from the whack I would so richly deserve would blow tens of thousands of rupees worth all over the cloister), I employed the invaluable ruse of the selectively deaf: “I’ve had an idea darling: why don’t I go and get you all some carrot cake?” “Don’t you ever listen? That’s just what I said!” “Oh good: great minds think alike.” “I wish you’d get a hearing aid! Now just run along and get something delicious: we need it for elevenses.”

I shimmied out of the door into the cloister like an Argentine dancing-master, leaving as little wake as a marine special forces midget submarine, to avoid disturbing the gold leaf, the students engrossed in cleaning with exquisite tenderness the hands, faces and vestments of the first 7 Archbishops of Goa, or my beloved, who was looking quite disturbed enough already. Ten minutes (and an exquisite Plum-headed Parakeet in the treetops above the road to the excellent gallery-cum-cafe next door) later I was trying to persuade the manager to part with his day’s supply of carrot cake. I’m not certain if it was my silver tongue or my silver, but after a negotiation lasting only another 5 minutes, I was carrying the last carrot cake in Panjim triumphantly back to the exhausted and ravenous conservers.

Delayed only by a Rufous Treepie (a glamorous relation of the Common Magpie) I made it back to the atelier with seconds to spare before 11 o’clock, and made a grand entrance: “it’s the box-wallah” I announced, to a stony silence. The whole class, students and teachers, were engrossed in the pearly wisdom of Caterina, which was being filmed for posterity. If looks could kill, the carrot cake and I would now be six feet under, pushing up the Goan equivalent of daisies. I beat a hasty tactical retreat into the Archbishop’s garden, to commune again with the barbets, bulbuls and drongos.

Hey-Ho, I could be in England, cold and wet: being a restoration camp-follower in Goa beats it into a cocked hat…and they all loved the carrot cake.

« Behold the Heritage – O Heraldo Sunday Review
We have the finishing line in sight! »