February 9, 2016
UncategorizedComments Off on Triumphant Tuesday

Elizabeth, together with husband Sebastian, arrived last night from London. It’s been wonderful to know that Elizabeth has been holding the fort in London and enabling us to do what we needed to do here in Goa.It was great to catch up with her and to be able to fill her in on all that we have achieved over the last weeks – I am so proud of all the students and the progress that they have made. Elizabeth has told me how much they have achieved in London which is great, I do miss them.

Today was a critical day. It’s Shrove Tuesday, which of course means that tomorrow is Ash Wednesday and one of the key dates in the church calendar. We have been given a deadline yesterday that the bamboo scaffolding in the Archbishop’s chapel, which is where the team have been working on the statue of Jesus, has to be taken down by seven o’clock tonight.

Practically everyone on the team got up the scaffolding under Ruthie’s guidance and took part in the final rush to get the statue finished. The work included final cleaning by Sandesh and Rhea, regilding by Sandesh, Joseph, Rhea and making beautiful new rays by Eveny and Wynzel to go behind the Sacred Heart of Jesus, and final retouching  by Sandesh and Ruthie where necessary. I went up only once yesterday to check the work had been completed to our standard and I was impressed. It came right down to the wire, but we made it and when the Archbishop comes in for the first mass at 06:30 tomorrow morning he will see the cleaned and restored statue in all its glory! 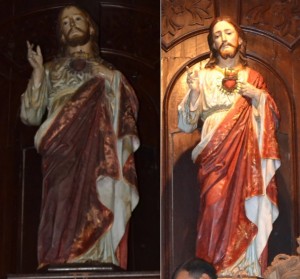 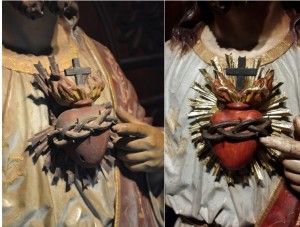 While this was going on the other work did not stop, so retouching of the paintings, varnishing the ones where the initial retouching had been completed, taking the japan paper off yesterday’s paste reline – it’s been a hive of activity. In the middle of all this we had another journalist come in to interview the students and the staff.

I am happy the day came to an end as I was finally able to go to bed as I was not feeling at all well. Needless to say that Joseph kindly went out and bought me special drinks for rehydration.